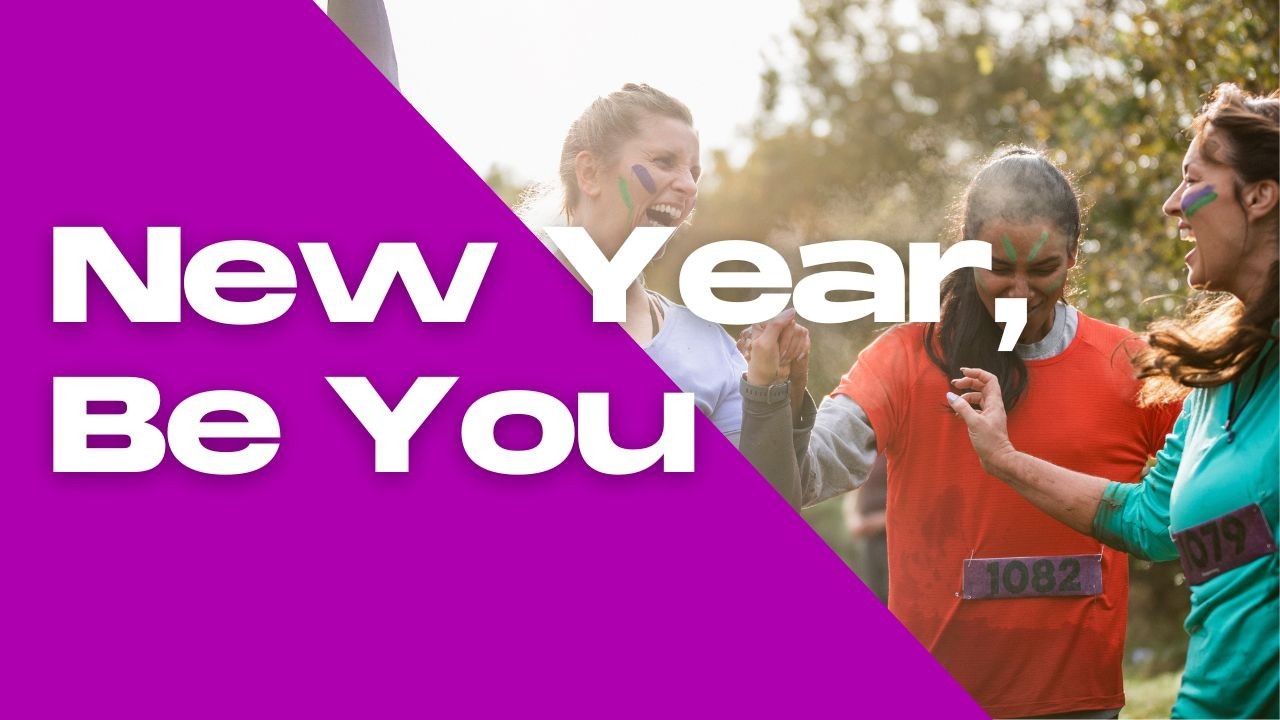 New Year, Be You

It’s that time of year. Everywhere we turn there’s the new year, new you narrative.

Clickbait articles promoting diet culture disguised as ‘clean eating challenges’ or detox programs are all over your social media.

Here’s a dirty little secret. I actually do love the new year. Not the New Year’s Eve celebrations (these days I’m in bed by 9:30) or the weird things your family has you eat on New Year’s Day (for our family — hog jowl and black-eyed peas — yes, you’re reading that right, hog jowl).

I love the idea of a fresh start. I love a new calendar (old school, paper please). I love taking the time to assess my goals and dreams for the year. And,  as a lover of the New Year, I’m susceptible to the hype.

Sign up for a big race even though I don’t really have the time to train with my busy schedule — here’s my credit card.

My gym is doing a January challenge — I’m all in.

15 minutes of daily meditation — give me that app.

I can look back at years of journals where I sat down to plan New Year’s goals, only to see that I abandoned them or fell short.

The new me really was just the same old me and I constantly felt like I failed to evolve into this New Year version of myself.

I don’t know if it was getting closer to 50 than 40, the pandemic, or the hecticness of working in startup environments for the last 5 years, but something has shifted.

New Year Being Me

Instead of looking for a new me, I’m focused on being me, really me. And that’s not the “ideal” unrealistic version of myself that the culture tells me I “should” be.

My house is always slightly to very messy and no matter how many Marie Kondo accounts I follow, the mess piles up.

I love riding my bike but despite covering UNBOUND Gravel every year, I never want to ride it 200 miles. Maybe not even 100 miles. Actually, my perfect distance is somewhere in the 30-ish mile range with friends.

I’ve gained almost 30 pounds in the past few years. My body moves differently than it did in the past, but I’m done with the yo-yo dieting cycle that I’ve been on my entire life.

So why do I (and maybe you) feel the tug every year this time of year to make a list of mostly unrealistic goals — some of which I don’t actually really want to achieve?

Because we’re fed the idea that who we are isn’t enough and we need to be a different version of ourselves to be successful. I’ve also come to realize that a lot of us adopt this ‘change yourself to be better’ attitude from the sports we love — which were largely built for men.

Our sport culture is reflective of our culture at large, and sport culture was built for men. We’ve been ingrained with ideas like “no pain, no gain”, or “pain is just weakness leaving the body”.  These phrases promise to make us a better version of ourselves, but in reality, teach us to approach sport and life through a lens of self-criticism — and you must suffer to be better. This view can lead to feeling like a failure and having perfectionist tendencies, which in turn lead to unhealthy patterns.

It’s especially hard to resist these narratives because they’re often rewarded in our society. When I was coaching at my old tri club, there would be athletes who should have been in bed with a bowl of chicken soup but instead were coughing up some very gross things at a workout. Or a busy mom who would wake up at 3:30 in the morning to get in her workout because she had to work early, even though she didn’t get to bed until close to midnight because one of her kids was up half the night. People would call these athletes dedicated. No one seemed to point out that the reason their sickness lingered or that they were getting injured might relate to the fact that they didn’t feel like they could take a day off.

That’s not to say that we don’t make sacrifices in sport and in life to achieve goals that are important to us. Every finish line will require sacrifice. Workouts will often come with very painful moments and there are plenty of days when we have to push through inertia. There’s a difference between pushing ourselves in a way that also promotes our mental health and pushing ourselves from a place of guilt or self-criticism.

In the long run (and maybe even the short term) self-criticism can result in the opposite of what we want. Instead of helping us improve, it can hurt our performance. Sports psychology literature on women shows that self-criticism is linked to perfectionism, anxiety, rumination, and even burnout, all of which can negatively impact performance rather than promote it.

Self-criticism also activates the amygdala, the part of our brain responsible for fight or flight. It leads us to think less critically, operate out of stressful behaviors, and often make poor choices.

Because self-criticism is rooted in unrealistic expectations, it undermines our progress. We’re never at that point of perfection. We’re never good enough. So we feel like we haven’t done enough or like we’re failing.

This showed up in my life hard this past year. I attended a new CrossFit gym after a year of feeling fairly unfit. I was finally starting to feel like my old self when a minor shoulder injury turned into frozen shoulder, a condition that can last up to 6 months and severely limits shoulder movement. Most of the exercises were modified for me. I remember one of the trainers complimenting me for a workout and I sharply responded, ‘thanks but it was modified’, quickly dismissing the compliment. She just looked at me and asked why I was so hard on myself. That moment was a wake-up call. I had been showing up and working hard within the limits of my body for months but I was beating myself up for some arbitrary shortcoming.

Self-compassion isn’t about shrugging your shoulders and saying, “Eh, might as well not try.” It doesn’t mean we don’t look for opportunities to constantly strive to be the best version of ourselves. It’s about approaching your thoughts, self, and action with clear-sighted curiosity instead of judgment. It’s about understanding yourself and putting things in a greater context. It’s letting go of the idolized version of yourself and loving the real one. It’s here where we open the door for real growth. 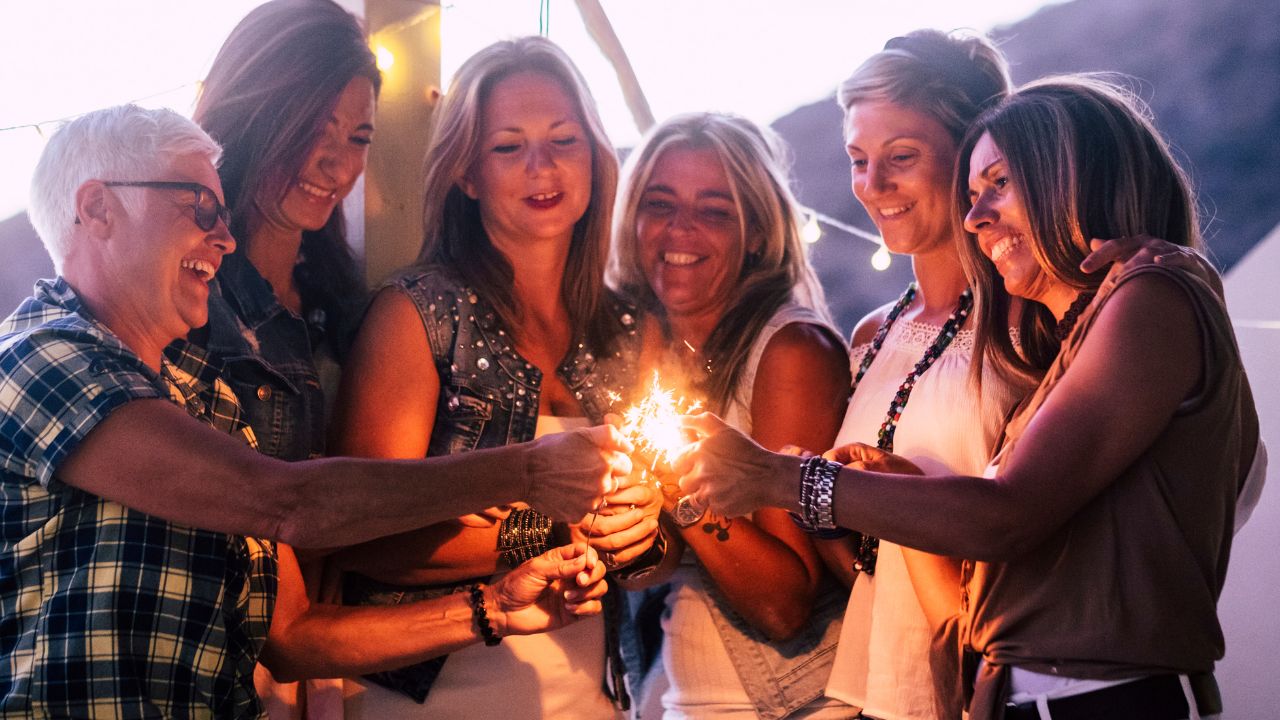 When we stop beating ourselves up when we miss a workout because of a big project at work, or a sick kid at home, and we stop constantly comparing ourselves to someone else and stop doing what we think we “should” do, we have the freedom to explore what we really want and the permission to celebrate how far we’ve come.

Because it gives you positive energy instead of beating you down, self-compassion actually improves athletic performance in women, and it makes it easier to accept inevitable setbacks with grace and try again without fear.

So as I flip the calendar to start a fresh new year, I’m going to resist that cultural pull towards self-criticism and resolve to practice self-compassion instead. Because that’s where the real growth happens. I’d encourage you to do the same. And if you fear, as many do, that self-compassion will undermine your success by making you lazy or apathetic, don’t.

My hope for 2023 is that we as women can let go of the quest for the “new you” and that we can face the new year with self-compassion and curiosity, and ultimately be our best selves, as we are.

*Self-compassion information based on a talk given by Dr.  Erin Ayala at the 2021 Feisty Women’s Performance Summit. Learn more about Dr. Ayala at https://premiersportpsychology.com/our-team/dr-erin-ayala/